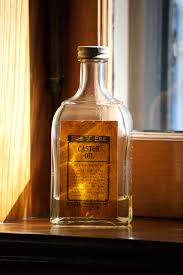 Castor Oil ( Ricinus Communis- Latin name) healing benefits have been documented in 1877 by the physician Edgar Cayce to heal wounds and ailments, also known as the “Palm of Christ” – Palma Christi meaning it has the same healing properties as the healing Hand of the Jesus Christ.

Castor oil has been used extensively on wounds as it promotes faster healing and keeps the sores from drying out. It promotes growth of new tissue between the wound and the environment as a result of which it prevents infections from occurring.

It has been shown that it reduces pain and inflammation when applied to the wounds and on the joint pain. It has healing properties for rheumatoid arthritis or psoriasis when applied topically.

Candida is a commonly spread fungus that bothers many people especially elderly people. The most common signs is a whitely covered tongue and mouth. Castor oil pulling has been shown by many studies that reduce the candida to its normal ranges.

Castor oil when taken orally, 1 teaspoon, relieves constipation and enables the normal stool flow. It helps in the elimination of the toxins build up in the intestines and the colon.

When applied topically as a castor oil pack on the right side below the rib cage, it increases liver detoxification and promotes liver function. On a piece of cloth pour 2 teaspoons of castor oil, place it on the right side and cover with plastic foil. Put on some old t-shirt and rest for an hour or two before washing it out, or you can leave it overnight.

Castor oil when taken orally builds the barrier of the gut lining, helping in rebuilding the gut wall and increases the absorption of the nutrients.

It has Omega 3, Omega 6 and Omega 9, it has Vitamin E. Castor oil supports the glutathione the master antioxidant, increases oxytocin-the happiness hormone and increases nitric oxide, the anti-aging molecule.

When applied topically on the abdomen it relaxes the muscles and is good for PMS and helps with abdominal cramps.

Castor Oil can cause premature labor, so it is not recommended for pregnancy.

Castor Oil can cause rashes, if a person is allergic to it, so it must be tested on the skin a small amount first.

Castor Oil can cause diarrhea if taken in larger quantities.